Hey Legend Trippers,
Do I have a tale to tell. This is one of Florida’s popular monster stories. This tale has been featured in many books about cryptozoology and unknown animals. Ivan T. Sanderson wrote about it first in Fate magazine in 1968 and then in his 1969 book “More Things”. Loren Coleman wrote about it in his 1983 book “Mysterious America”. It featured in Charlie’s Carlson’s Strange Florida and Weird Florida books. Almost every book about Florida’s legends and unknown animals mentions this event. My wife and I decided to go a legend trip to find out the truth of the Clearwater monster.


It all started back in 1948 on the beautiful beaches of Clearwater Florida, when a young couple claimed to have seen a strange monster like beast emerge from the ocean on to the beach. They immediately fled and told the local law enforcement. Later when they went down to the location, they found this large tracks of a three toed animal. The tracks came out of the water and walked along the beach and then back into the water. The footprints were huge, measuring 14 by 11 and a half inches. There appeared to be 3 distinct toes with talons and a pointed heal. The story made not only the local newspaper but all over the country. The headlines read “Huge Sea Monster’s Tracks found on Clearwater Beach”. 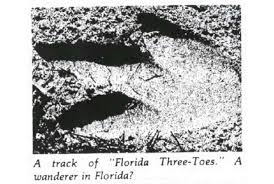 The tracks would continue to appear on beaches, the following days, all along the west coast of Florida. Enter Ivan T. Sanderson: For all my legend tripping readers, you know that Mr. Sanderson is the one who coined the term “Cryptozoology”. I did a tribute post to Ivan T. Sanderson, back in Jan 8 2014 and refer to him as the “original legend tripper”. Back in 1948 Mr. Sanderson was a noted zoologist, science commentator for WNBC in New York City, a science writer for the New York Herald Tribune, and a respected authority on creatures of a cryptozoological order. He had read about the reports and visited Florida in November of 1948 to research these tracks, and another set of recently discovered tracks along the Suwannee River. Sanderson spent two weeks in Florida, and months following that, studying plaster casts of the tracks, as well as publishing a 50-page report on the strange tracks. Sanderson’s final conclusion was that the tracks were made by an unknown animal. He pointed more to fact that this creature had feet like that of a penguin, not that it was indeed such a species. Because the creature had been witnessed by the aforementioned young couple, who explained that this creature was a misshapen form of aquatic beast, he simply referred to it as “Florida Three-Toes” and listed the case still open. 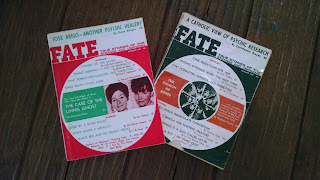 Over the next 10 years, the footprints of the three-toed beast frequently appeared on Clearwater Beach and nearby Dan’s Island, as well as on Indian Rocks Beach, St. Petersburg Beach, on the Courtney Campbell Parkway and on Sarasota Beach. Prints were also discovered off the coast of Dunedin on Honeymoon Island and along the Anclote River, just north of Tarpon Springs, as well as on Phillip’s Hammock nearby Tampa Bay, and on the banks of the Suwannee River.


On April 11 1988, Jan Kirby, a reporter for the St. Petersburg Times reported that the whole monsters tracks had been perpetrated by Tony Signorini and Al Williams. Signorini stated in an interview that they had been inspired by photos of fossilized dinosaur tracks in National Geographic and recent Loch Ness monsters pictures in the newspaper. They had the huge dinosaur feet made of iron used in creating the tracks. They fastened tennis shoes to them and went out certain nights, and started making tracks on the beaches. It has now become a colorful part of Florida history. The television show 'Monumental Mysteries on the Travel Channel did a segment on the tracks which  can view here: Mystery of the Florida 3 Toes

On 13 Nov 2015, Tracy and I had the pleasure of meeting Tony Signorini’s son Jeff. To my excitement, I not only got to see the cast iron monster feet, but I actually got to hold them and make castings from them. It was great, when Jeff and I sat down and he told me the whole story of the tracks which are called Dina (after the word “Dinosaur”). He had numerous newspaper clippings that he and his dad had saved about the monster track sightings. He went over some of the discrepancies of what was reported in the media and what actually happened.

First, Jeff’s dad Tony did not walk for over two mile in the tracks. They things weighed thirty pounds each. He did however state that Al Williams would take him late at night, on a rowboat to the beach and let him off to walk onto the beach and down a little ways and back onto the boat. They would then row down a little ways are repeat the process. Back in the forties, there was not a lot of people living in Clearwater, that  there is now, so it was easy to go out at night and not be seen making the tracks. There was not a 6 foot gap between prints. Tony would swing each foot out for each print put it was not that far a distance between tracks. After the tracks were found and reported they would wait a while and pick a new area to make more tracks. If nobody found them, they would send a friend out to find and report them. 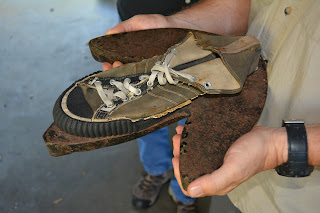 As far as the pilot who reported seeing a large animal in the water, Tony knew the pilot, so he was in on the joke as well. The tracks that were investigated by Ivan T Sanderson at the Suwannee River, were found on property owned by Tony’s friend. Tony and Al loved hearing people talking about the tracks and reading about them in the newspaper. Back then, there was not a serious look for cryptids, like there is now. They weren’t doing it to make money, to them is was a harmless funny joke. It’s not like they are the only ones to have ever done this before.  Let’s not forget Frank Hanson and the large primate frozen in ice called the Minnesota Iceman that he was showing in shopping malls. Also, look how many people are putting Bigfoot videos on the web that are obvious hoaxes.

The other sightings are either also hoaxes or based on observer error; some sharks might resemble a giant penguin when seen from above under adverse conditions, for example. When asked about the sightings, Tony stated he didn’t know anything about them, which was true, he was only making the monster tracks. Back then, not a lot of people know about manatees so they could have been mistaken for a sea monster. If read some of the sighting reports, you’ll notice that they have nothing to do with the tracks. They saw something in the water and not tracks. The newspapers started putting them together.

When it comes to Ivan T Sanderson, he was misquoted numerous times in the media, about the tracks. He never said it was a large penguin. What he said was that the tracks reminded him of a penguin, but he was never sure what made the tracks. A newspaper ran with the comment about penguins. Neither Mr. Sanderson nor anyone else, floated the penguin theory while he was in Florida, thus encouraging others to "see" one. This was a story published by Mike Dash years later, when he also falsely called Ivan a "self-taught" zoologist. Ivan Sanderson was suspicious of the tracks being a hoax and man-made. The media didn’t pick up on that part. In fact the local police told him that they were pretty sure that was somebody’s idea of a practical joke. Recently I found this blog about Ivan and the whole three toe investigation. My own opinion is that Mr. Sanderson at first thought there was something to these tracks, but later came to the conclusion that it was a hoax. I'll let you be the judge. The blog is at: Short-post-on-tall-tale.


I’m not sure what Mr. Sanderson saw from the airplane when he flew over the area. But again he didn’t see the animal come ashore and make the tracks. I make it now secret that I am a huge Ivan T Sanderson fan. Just because this turned out to be a hoax, does not change my opinion of the man or his work. They didn’t do DNA testing back then. He had only the eyewitness reports to go off of when he was shown the tracks. He has brought a lot to the cryptozoology field and will never be forgotten.
The thing that puzzles me about the tracks is why anybody didn’t notice that they were bipedal. Most of the sightings were of a large reptile type creature on all fours. If it were a large lizard, then there would have been a line up the middle of the tracks for the animal’s tail dragging. Alligators leave these kind of tracks. And what bothers me about the giant penguin theory is that penguins do not have long strides when they walk. I have watched penguins on the web and they all take small steps, even when they’re running. Again, these are my observations into the case.

Not every trip in going to result in the discovery of a real animal. Sometimes you do discover that it was a hoax. In this case, much like the Minnesota Iceman, a wonderful hoax. However, when it comes to legend tripping, you are looking into the truth behind a legend, which can be just as exciting. I want to thank Jeff Signorini for allowing me to come to his home and look at the monster tracks and for sharing with me and Tracy the tale of the Clearwater monster. Jeff allowed me to make a casting of the fake track for the International Cryptozoology Museum, at the request of Loren Coleman, who has a critical thinking corner of the Museum, where there are displays of historically known hoaxes.
Posted by Legend Trippers of America at 05:26 1 comment: 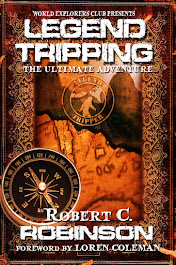 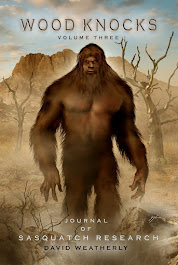 I did the chapter on the Skunk Ape

Crytpid Culture issue 8 is out 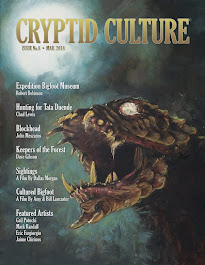 I wrote an article on the Expedition Bigfoot Sasquatch musem 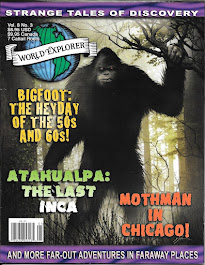